Just installing 13-STABLE version, build 71 (latest) using disc1.iso. During hardening setup at the end of installation, I chose both random_pid and enable_aslr. However, after reboot, it's just went to kernel panic, and keeps rebooting with the error: 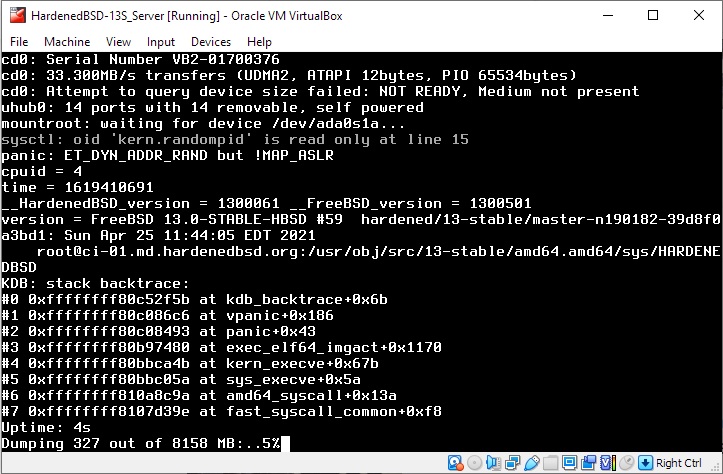 TBH, I've been left far far behind in my understanding of C or C++ programming and codes, but digging into the kernel code where the panic message is suggest that there must be something about these codes in sys/kern/imgact_elf.c:

With enable_aslr mode turned on, it checks and failed the kernel assertion of MAP_ASLR, but I have no idea what are the rest. Can I say that ELF loader failed to conform to ASLR?

For additional note: fresh install, just as finishing the setup. Disk is formatted as MBR UFS. I did not use ZFS because when i tried that on my FreeBSD with ZFS, pkg upgrade messed up everything (can't remember the error code, but when I reinstall FBSD with UFS and perform the same actions, it is ok. Plus I don't need ZFS for now since there is only 1 disk and all running as Guest VM in VBox).

Hopefully someone can help me understand those codes and how to fix it. Thank you :)